Hey friends and welcome back to another lovely little MMM instalment. It’s been a dreary ole week here at the Purple Melon headquarters, so allow us to put a spring back in your step and lift the mood ready for a weekend full of frolics with our chosen choones for this weeks playlist!

Kicking things off this week is Latin superstar, Marisa Monte who is back with an incredible new album, PORTAS, which features the lead single, ‘Calma’. Well worth the wait, Monet’s album is a contemporary Brazilian pop masterpiece with Jazz and soul infusions. PORTAS is Monte’s first release in over 10 years but the 4-time Grammy winner hasn’t lost her touch at all. The new project is a soothing delight for the ears, with it’s subtle instrumentation and gentle vocals that incite movement with every listen.

Next up on our new music radar this week is a newbie from Cloudkids Neoni with ‘LOSER’. For those who don’t yet know Neoni, they are the badass sister duo with some seriously fiery tunes under their belt and ‘LOSER’ is no exception. A moody yet explosive, pop-infused, alt rock track ‘LOSER’ is aimed as a big F* YOU to all those people who try to define or change you. The perfect tune to pop on and rock out to this weekend without a care in the world and a certain finger high in the air.

“LOSER is about getting those people and those opinions out of your life. The last thing a person needs is someone who questions their every move, every decision, every thought, every vision. So this is our middle finger.”  – Neoni

Diana Goldbergs ‘BLACKBLUEYELLOW’ is up now as she dives deep into a theme she herself has often battled with. This next single discusses the hold perfectionism can have on your career and creativity. A known beast to many, Diana gets vulnerable sharing her thoughts and feelings surrounding the ever lurking tyrant, claiming that here is where she takes her power back and where you can too. With a slight air of melancholy, Diana’s neo soul vocal remains a key factor whilst layered 80’s synth sounds intertwine with a racing electronic beat.

“There’s always a lot of internal pressure that you have to be better and greater, and that limited a lot of my creativity. There’s a lot of metaphor to the song, from the colors representing the flashing cars to the colors that make up a bruise.” – Diana Goldberg

We leave these female powerhouses now and check out the new No Mana x Wolfgang Gartner’s exciting collab ‘The Original’. Oozing with nostalgic electro house, heavy beats and industrial style synths, ‘The Original’ is a pumping, energetic dance track that is bound to get you moovin’ and a groovin’ this weekend. So pop it on for an intense energy boost and a hard hitting boogie!

“I wrote this track a few years ago and have been playing it in my sets since. It was intended to be a secret weapon for my own DJ sets and it has served that purpose well. Now, it’s time to set it free into the wild and let others enjoy it.” – Wolfgang Gartner

Up on the choo choo tune train next is a new one from Casper Sun and single ‘Chill W U’ ft Sunroof95. An array of uplifting, light electronica, an emotion inducing instrumental and partnered with Sunroof95’s luscious vocals, ‘Chill W U’ is an instant cosmic classic. Otherworldly, enticing and overflowing with those delectable summer vibes, Casper Sun shows us yet again why the sky’s the limit.

Someone once told me a person needs 8 hugs a day for maintenance and a healthy immune system. I didn’t really get what that meant at first, but after this year, I see what she means. ‘Chill W U’ is a song about love in all its shapes and forms, and at the end of the day, I’d love nothing more than to spend time with friends and family. Maybe we’re not quite there yet, but maybe we can get closer one more hug at a time.” – Casper Sun

Last but by no means least is a saucy little banger from indie-rock outfit Hyde Away as they introduce ’10:30′. A feel good track at its absolute finest, ’10:30′ is bursting with life, from infectious riffs, to clever lyrics and elevating strings. All wrapped up in an ear worm ribbon, this latest single is an absolute gift from such an up and coming, talented band. Do yourself a favour this weekend, pop ’10:30′ on and shake it out to this tasty alt-rock team and let it lift your spirits and wash away any blues.

“The song was written the morning after a night out in about 15 minutes. I was thinking about a girl I saw who was constantly on her phone whilst she was on a date with her boyfriend.” – Hyde Away 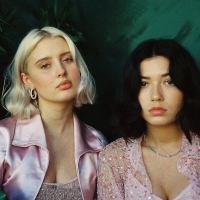